I finally found him, sitting the fifth row of the bleachers, digging through his duffel bag for a Clementine to munch. Orange fuel, peel and all, for the big match to come.

One, he confesses with a grin, was a total fluke. “The kid just let go! Or his hands slipped. Whatever. He got Beefcaked!”

He smiled. We fist bumped. Hugged. Did a little head butt thing that sort of hurt. And then he swaggered off to cheer on a teammate while I fought the crowd for a seat. In less than an hour, he’d be wrestling for his weight division championship at the regional Charger Classic.

2013 marks his third and final year in middle school wrestling. His uncles and cousins were all wrestlers, some of them quite good. State finalist good. His grandfather loved the sport. Me? I wrestle with doubt, not sweaty peers in singlets. The first two years, he rode the bench for the most part, occasionally getting a JV or exhibition match. His record stood at 1 and a bushel of losses. But he kept going to practice. Kept running and sparring and enduring the ribbings by others on the squad. The practical jokes. The sparse words from coaches more interested in the kids who were winning.

This year, he decided to put his nickname on the back of his spirit wear.

The timid cat he once wanted to keep safely tucked away had been unleashed as a lion.

Before his champion match yesterday, his record for the year stood at 10-7. Ten pins for the wins. I reminded him of this just moments before he took the mat. I said, “Son, look at me.” He got all intense, the way he does, and planted his forehead against mine. Nose to nose. Eyes to beautiful blue eyes.

“Win or lose, be a gentleman. Be a good sport. Be kind. And know that I will always be proud of you.”

The kid weighed more, as Ethan wrestled up for the tournament, and he stood a few inches taller. After the first period, after winning the toss, Coach called neutral when Ethan wanted to be on top. These aren’t excuses, mind you. Just facts. As with all things in life, the facts aren’t always in our favor. How we accept them is most times the only thing we can control.

He stood on the podium with pride, accepted his silver medal, and then helped his opponent up and patted him on the back.

There are times I feel I cannot carry the burdens that are a part of being a father. I turn my back, afraid to engage, replaying the mistakes I’ve made in my mind, knowing that I’ll make many more. The chant in my head: “I can’t do this.” But as I stood there, feeling his sweat and breath on my face, my mistakes didn’t matter. I was his father and he was my son. In that moment, win or lose, we transcended the shit and frustrations of life. He would know that I loved him and cared for him with a frightening savageness. And now, as he sleeps on the couch, his medal still around his neck, his body bruised but still, I love him even more . . . 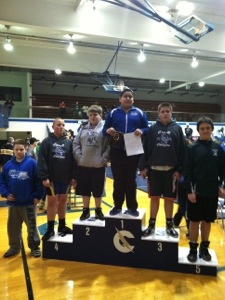 What The Cheek Wants