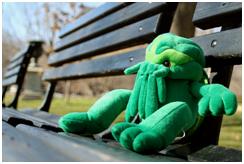 I’m sure you rang in the New Year in a rather ordinary way.

Maybe you attended a massive shindig, complete with dancing, merriment and those annoying noise makers that sound like strangled ducks. Perhaps you hosted a modest get-together for a few close friends, popped the cork off a cheap bottle of champagne, and raised a glass to the aging and mumbling Dick Clark as the big ball dropped. It’s possible you snuggled with a loved one on the couch and watched your favorite old movie, leaning over to steal a kiss at 12:04am because you missed the time. Or, either lacking or not desiring these options, you slipped into January 2009 alone, lost in contemplation, or a good book.

Of course there are myriad variations on this theme. But it doesn’t matter how imaginatively you shake and stir the elements; in the end you’re sipping something very . . . well, as I said, ordinary.

You are boring. You have no sense of adventure. No appreciation for the rush that comes from shear, unimaginable terror.

No, I’m not talking about the guy who did that staged and overhyped NYE motorcycle stunt in Vegas. That guy!? Loser! Nor, in a broader sense, am I talking about Hollywood Slasher flicks, with their one-dimensional villains, ham-fisted soundtracks, predictable shrieking and corn syrup gore.

I’m talking about madness from the Other Worlds running rampant* in the streets. In a sleepy little town in Massachusetts, where behind every Uptown, Southside and French Hill corner, death lays waiting to steal your soul. Through yawning gates in graveyards and abandoned woods they come – hideous Elder Things, seductive Goat Spawns, and oozing Flying Polyps – ushering Earth toward a rendezvous with an Ancient One. It might be the scaly Yig, the Father of Serpents, the mysterious Shub-Niggurath, the Black Goat of the Woods with a Thousand Young, or the mother of madness herself, the Dread Cthulhu, who would surely devour me in less than a heartbeat for calling her a woman.

Regardless of who, or what, comes out of the gates, all of mankind is FUBAR.

Yes, dear Tweaker, while you were busy being normal, reveling and oblivious, I and six other brave comrades gathered at the lair of the Boomcoach and, as is our yearly custom, rang in the New Year battling evil with dice, our imagination, cheese balls, and a never-ending fount of Mountain Dew. This year, we banished the birth of horror in Arkham, circa 1926, with our Tommy guns a-blazing and the mystical incantations of the Book of Dzyan upon our lips.

And it only took us six hours. That’s how we roll.

* Once we finished saving your sorry and ungrateful asses, we gathered at the Silver Twilight Lodge for a heady round of Three Philosophers and some Trivial Pursuit, where this now-humbled investigator learned that, in addition to meaning “occurring without restraint and frequently, widely, or menacingly,” rampant also means “to rear on the hind legs.” That was embarrassing . . .